Combining a passion for adventure and a love of exploration, Kim has spent her career seeking out remote and exciting objectives. She has skied on all 7 continents, with first descents on 4, including in the Arctic and Antarctic, and adventured in over 50 countries. During her travels, she has climbed and skied big peaks in the Himalaya, Andes, and the Karakorum, and has carved lines on peaks across the globe from Morocco to Bolivia, Greenland, Norway, Argentina, Tibet, Japan, and New Zealand. She has numerous first female descents in Southwest Colorado and has completed many ascents and ski descents of 13ers & 14ers. In 2013, Kim completed 65 different routes in the Tetons, including the first female descent of the notorious Otter Body on the Grand Teton, and, in 2014, she went on to be the first woman to ski-guide the Grand Teton.

With a home base in the incredible Teton Range, she enjoys guiding for EXUM Mountain Guides and Jackson Hole Mountain Resort Alpine Guides, and for Ice Axe Expeditions internationally. Though she started her career as an alpine ski coach in the Telluride, CO valley, she gradually transitioned into climbing and ski mountaineering and moved further north to pursue new mountains and opportunities in Wyoming. She has been an instructor and/or guide for numerous companies and ski camps, as well as being a 12-year past member of the San Miguel County Search and Rescue Team (and Advisory Board member), with medical, avalanche, and rescue certifications.

On the stage, Kim has participated in numerous film projects and also delivered multiple presentations and slideshows, moderated discussions, and hosted live broadcasts and live shows. In addition to her passions as an athlete and speaker, she is a freelance writer and recreational photographer.

Kim lives with her two great loves, Pete Linn and daughter, Charlie, and their two dogs, Goose (JHSP avalanche dog) and Red “Rooster” Cogburn (ranch dog), on the Linn Ranch in Wilson, WY. When not working, traveling, or playing in the hills, her days are filled with horses, cows, llamas, donkeys, dogs and chickens and the extended family at home as well, as helping Pete with ranch life and his Outfitting business – www.linnoutfitters.com. 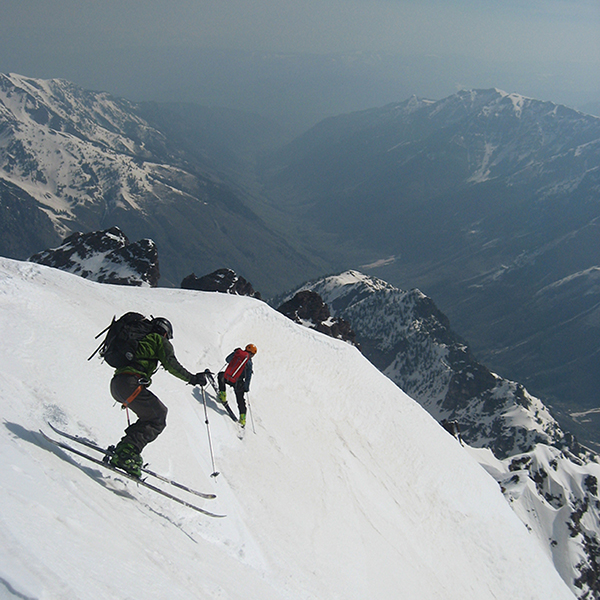 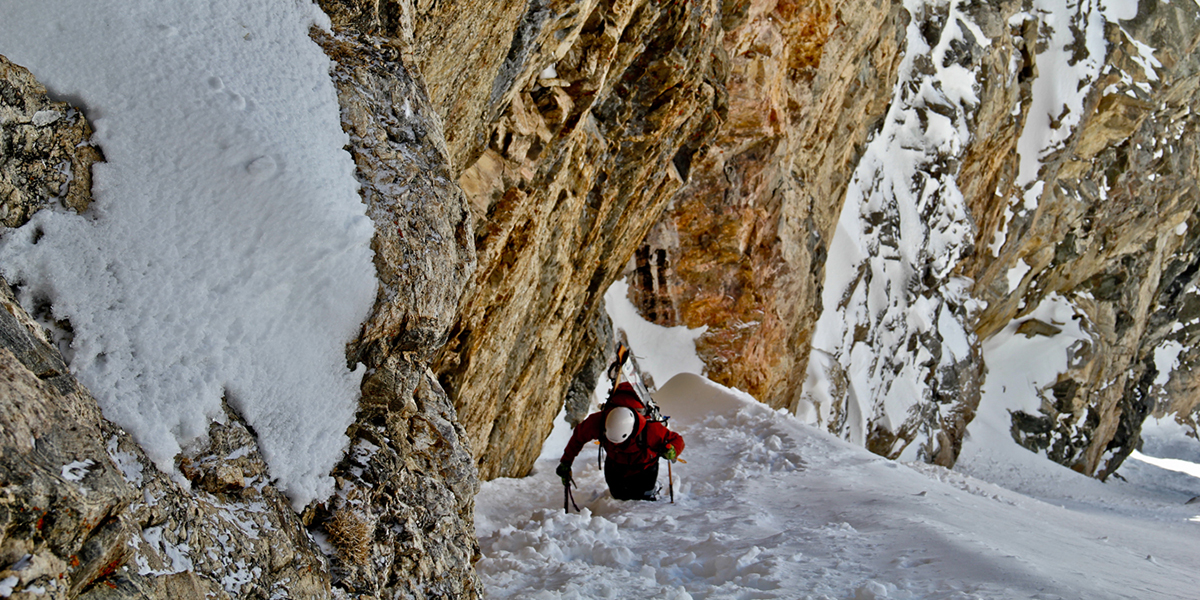 The following is not a complete list but more of a general overview of some fun had over the years:

Kim has skied all the direct couloirs of the infamous Little Wasatch Ridge, Telluride, CO:

* No O2 on any high altitude climbs, No on-mountain Sherpa support 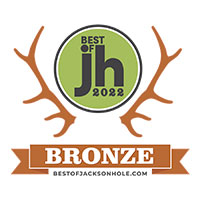 “I had an amazing opportunity to be guided by Kim to the top of the Grand Teton in early June 2014. I had already climbed the Grand by several routes but this time my desire was to ski down from the summit, which is a significant and serious undertaking. That May, I had just returned from a disastrous and disappointing attempt to climb Mt Everest and was dealing with “demons” that made me question my confidence and desire to take on additional mountaineering objectives.

I needed a challenge to “re-boot” my adventure psych and skiing the Grand seemed a worthy objective to help cure me of my funk and rid me of the demons. I went with a lot of trepidation. The prior year, I had undergone total knee replacement thus making me the first person to attempt skiing the Grand with two artificial knees. At age 61, I might also have been quite old relative to other skiers who have attempted skiing that mountain.
From the moment we met and stepped on the mountain, Kim’s cheerful and ultra-positive demeanor was an instant breath of fresh air and a tremendous motivator.
Over the next two day climb and ski descent her hooting and hollering of encouragement to me, not to mention exhibiting her own joy of being in such an amazing place, made me very comfortable and at ease. Her excitement was really contagious. I never felt tired primarily because she kept yelling to me how strong I was so how could I ever let her down? Stepping into my skis on top of the Grand was a little nerve racking as the exposure is tremendous but I knew I was in good hands. My concern turned to an adrenaline fueled sense of joy and adventure as we made our way down the steep slopes of the Ford Couloir and then transitioned to a roped rappel down the Stettner and Chevy Couloirs and then back again on skis to go down the “apron” to our base camp.